New Vision with Weather – When it Rains, It Pours

“When I Wash My Car, it Rains” 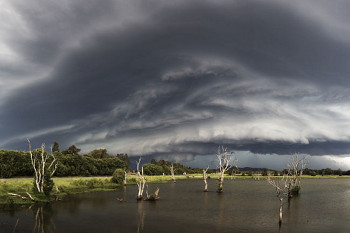 Imagine if something as simple as washing your car could change the weather. WOW! What a world it would be.

I recently asked someone, “Have you ever washed your car, and as soon as you are done, it begins to rain?” He immediately answered, “Yes, it happens to me all the time.” Many people just know it will rain if they wash their car.

Let’s take a walk down a road less traveled, and explore the possibilities of that one statement, “Whenever I wash my car, it rains.” It is a true statement to most people. (Of course you must have a car to wash in the first place.) Could people benefit globally thinking about things this way? “There wasn’t a cloud in the sky when I started, but by the time I finished washing my car, the thunderheads were upon us.” What if weather could be influenced that way?

Weather in the Public Eye

What is the single major topic that is in the minds of most people, most days of their life? It is suggested if you want to start a conversation, talk about the weather. Everyone has an opinion. Yes, weather is the main topic of interest.

Other issues will come and go. There are only so many stories about famous people, governments, or any number of transient events that draw your attention. But there are none that match the day to day resiliency as the weather. In recent times, weather has been even bigger in the news than ever before. Topics of interests such as global warming, climate change, El Niño, polar ice caps melting, ice age, and the excessive list goes on.

Now that the experts have pummeled us with enough information to make us all climate change savvy, many of their scientific findings and claims have been repudiated for inaccuracy. Gaia, Mother Nature, has easily defeated their flamboyant efforts with a blast from volcanoes spewing out massive amounts of greenhouse gases into the air. It makes human contribution to greenhouse gases insignificant in comparison.

What if there was a completely different way to deal with weather, as well as other things? What if the human spirit could be harnessed to deal with these issues energetically? Guess what? It has already been underway for thousands of years. I am not reporting on some new-fangled idea.

I am about to take you on a fantastic journey of understanding the simple complexities of the human mind, and how it can be used in global consciousness to change the outcome of events. THIS IS NOT NEW! The same practice has been done for thousands of years by various religious and spiritual organizations to influence the direction of our planet by moving the minds and hearts of man in directions benefiting man-kind.

Common examples in use are specific prayers or mantras that seek to communicate the higher good to the minds of others. When a group of people create a singular thought, it strengthens the output. The larger the group, the more power is behind sending out the directed energetic message. Again, most of these types of spiritual or religious undertaking deal with the highest good when it comes to global consciousness. What are the characteristics of a spiritual person?

What if we were to use this same principal idea coupled with the Law of Attraction to influence weather patterns? Traditional cultures around the world recognize the “Shaman”, “Weather Witch” or “Rain Man”. This is usually a person that has a spiritual connection with the elements such as spiritual meaning of your name. This person acts as a liaison between the people in need and the forces of nature. Secondly, they coordinate the group of people, or tribe, to be in like-minded unison to draw in the elements needed; in this case, rain.

Drought is obviously caused by the lack of rain. So, quite often in the work to break the drought and make it rain, there may be a rain dance where everyone is dancing in a rhythmic pattern to resemble or entice rain to come. This is not a social gathering. This is considered a serious engagement of body, mind, and soul. For many people their survival is at stake. During the dancing, which may go on for many hours, heightened states of consciousness are often reached, and contact with spirit guides may be sought.

Other people that work with vibrational energy to influence the elements include geomancers, dowsers, witch doctors, shamen, and Tribal Elders.

Now, let’s take this scenario one step further. Let’s paint a picture. As more and more governments are grabbing money from wherever they can, let’s look at how the balance could be tipped by a government charging for or taxing rain. You are probably thinking, “That’s ludicrous! That is impossible! How could a government ever justify charging someone for rain?” Yes, it is already happening. Here is how.

A farmer digs a dam on his property to catch water when it falls from the sky, so he can water his crops and does not need to rely on regular rain. The farmer then sets out to provide the pumps, power (usually some form of electricity), valves, piping, and the entire infrastructure to move the water from his dam to where it is needed. This is a great investment for the farmer and costs him out of pocket before he can grow his crops to pay back the money for the dam. It may take years of growth to pay for that investment.

Along comes a government official that assesses the dam and declares that since the farmer will be using the water to create crops that may produce an income, that he will be taxed by the volume of water the dam can hold, whether it currently has a drop of water in it or not. Then along comes the water department and installs a gage onto the output piping the farmer paid for, to further monitor his use of the water that has fallen from the sky. Therefore the farmer has created a huge bill for himself, and the government is now taxing him for his effort to create something out of nothing.

Lessons in the Law of Attraction

Do you think the farmer may feel some resentment? Maybe he would feel that he is already paying his way with regards to the government. So, for every bit of water he uses from his own dam, he will now be charged; even though the government did not give him a penny to compensate his effort. They didn’t even pick up a shovel.

This next part may sound like self-sabotage, and it is. Since the farmer doesn’t like what has just been pulled on him, he may inadvertently look at his dam, and even the rain to fill it, as a burden he cannot afford. How is he supposed to catch the rain, water and grow his crops, sell them, and do all that work, just to have the government there with bill in hand collecting the rain money from him without them putting any effort in to help him run his farm? This could be setting up such a negative vibration around his farm that it may not rain for years.

So if you ever hear that it is impossible for you to pay for the rain you receive, or even the air you breathe, think again. It is just a matter of time before it affects you directly. You are probably paying for it already at the checkout counter of the grocery store.

It is time to put a positive spin on washing your car during a drought. In times of drought, the government can mandate (That seems to be what governments like doing.) that everyone wash their car on a specific day each month. Therefore, most people will be washing their car on the same day. Just think how many people would be automatically thinking, “Every time I wash my car, it rains.” With that amount of concentrated mental energy shouting out that it is going to rain, the clouds will be driven to appear and provide.

You may think I have gone too far with this. That is fine. You have your spiritual opinion. Whenever you carry vast amounts of accessible information, you can flow between the logical, psychological, and the esoteric world at will. The information you don’t have available are the personal results my clients tell me about when they employ it for themselves… Amazing!

Believe that you can move mountains, and you will.