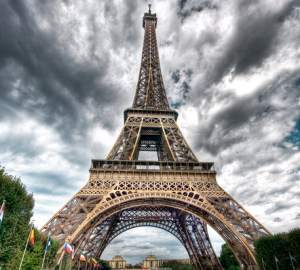 (Sorry, We were taking a picture of an airplane, but it flew behind the Eiffel Tower.)

FYI: Aviophobia or Aviatophobia – The fear of flying

A phobia can be based upon rational and irrational fear.

A classic case of a phobia that has intrinsic value for each side is the Fear of Flying.

Logically, it is hard for the untrained person to believe that a big piece of metal flying through the air, and against the pull of gravity, would have any chance of landing safely. However, this feat has been accomplished numerous times, and has a high reliability that you will wind up safely at your destination.

Even airplane pilots make a few jokes about it: “Landing a plane is a controlled crash” paints a picture of the stresses the plane undergoes at the most critical point of its operation.

Recent research has shown there may be physiological reasons to consider as well.

Deep vein thrombosis is a regular worry now amongst airline passengers, which is a clotting of blood mostly in the legs due to sitting for long times on flights. But this can mostly be countered by compression stockings, aspirin, and walking around.

Changes in the brain are not as apparent, but can still be felt. Some results can be quite severe. Frequent jet lag produces stress-induced hormones that can result in memory loss and brain damage. Other stress related events around travel can add to an already burdened mental process and cause further problems.

So, the next time you travel to Paris, and forget Iconic landmarks like the Eiffel Tower, you may be suffering from this malady.