Define the Universe. Want to know how?

Define the Universe and Spirituality…

Born a farm-boy in Norway, the beginnings of a #Spiritual life full of passionate learning and personal advancement began when he suddenly gained the responsibility of managing the family farm. Going forth to graduate college in Agricultural and Forestry Management, driving tanks in the military, learning several languages fluently, and gaining direction in Metaphysics and Spiritual disciplines; all before the age of 25.

His pursuit of knowledge never waned as he began commercial pilots training in the USA, he gained his Flight Instructor accreditations then opened his own flight school, and served as the Accident Prevention Counselor for the Federal Aviation Administration (FAA). After conquering that mountain, his pursuits went in a different direction in the fields of mind development and Spirituality, and the advancements that elevate humanity.

He saw the miscarriage of justice duping a society of non-intellectuals and sought to make a stand against ‘the machine’; a machine using mob psychology against the ‘great unwashed’ to meet the ends of the nameless, faceless people running the show. His contributions and challenges in helping those less fortunate are noteworthy.

His pursuit of uncovering the truth, from Medical and Government organizations was relentless, as he used the media as his weapon of choice in his campaign of honesty. He sought to educate the masses on subjects such as Constitutional Law and what true freedom is, as well as Paranormal and Spiritual issues.

His first love is always at the forefront of all of his endeavors; to learn as much as he can in every possible area of life.

You must be wondering why I am telling you all this information about 1 person; a person that makes a difference… After a long hiatus, and much meditation, he felt it was necessary for some of the most poignant questions in life be answered. He recently published a book you will find most intriguing and enlightening.

“Spiritual Science, Higher Conscious Thinking And How To Access The Universal Consciousness” 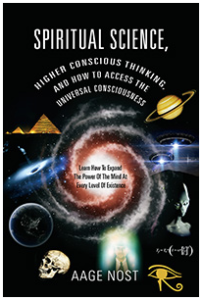 This book is easy and fun to read. But do not be fooled. There are depths to this information that only the initiated can fathom. I hope you have been keeping your ZOXing up to date, as you will need your proficiency to plumb the depths of what is presented here. ZOXing can easily be used to know the truth. But ZOXing these truths will give you a new appreciation for what our Universe holds for each and every one of us.

Spiritually in your Universe